FA Cup holders Arsenal eased into the quarter-finals with a comfortable 2-0 win over Middlesbrough at Emirates Stadium. The Gunners are favourites to retain the trophy and lived up to that billing with an impressive display which had the Championship leaders on the back foot from the outset.

Boro had won six consecutive games and not lost in 10 ahead of their trip to the capital, but must now turn their attention back to the race for promotion to the Premier League after they were given an indication of the task they will face if they return to the top flight.

Arsenal looked slick from the off, passing the ball around at high speed matched with excellent touches and movement. Boro struggled to get to grips with the pace and penetration and there were numerous scares before Arsenal inevitably broke the dead lock in the 27th minute with an exquisite goal.

Ozil went on a weaving run then cut an angled ball to the edge of the box as Cazorla touched it wide for Gibbs to skip to the byline and square across the face of goal as an unmarked Giroud steered home from six yards out.

Two minutes later, Arsenal doubled their advantage as the visitors switched off from a corner to allow Giroud to drift in unmarked towards Alexis Sanchez’s delivery. The Frenchman met Sanchez’s centre with a sweet near-post finish. Arsenal almost had a third on 34 minutes as Sanchez burst forward and played a one-two with Ozil and then chipped past advancing Boro keeper but Clayton managed to clear the ball off the line.

After the break Arsenal eased and Boro were able to get back into the game for spells but lacked a cutting edge.

Arsenal almost added to the scoreline on 62 minutes as Cazorla and Giroud combined to carve into the Boro box. Gibbs cut in from the left to rifle in an angled shot that Mejias palmed away. They were then back on the attack on 80 minutes as Chambers zipped a low cross towards Giroud but the Boro defence cut it out and it was scrambled away. Substitute Theo Walcott should have added a third with two minutes remaining after being put through on goal by Tomas Rosicky, but he dragged his shot for Mejias to parry wide.

In stoppage time Boro rattled the woodwork as Fredericks crossed in and Kike powered an eight yard header against the post.

Thanks to the Boro keeper, Mejias the score line stayed 2-0 as Arsenal eased into the last eight.

Ruthless efficient displays often appear too easy, Arsenal’s stroll into the quarter finals was a master class. What is really interesting to look at is how these displays are built in numbers and can they be repeated.

The building blocks of this victory started with the control of possession which had a direct correlation to the chances created. Arsenal made 740 passes with a pass percentage of 90%. Of these 35% were completed in the attacking third and 5% within the opposition box. Middlesbrough only had three periods of possession in the first 30 minutes where they maintained positive control of the ball. Movement is often key and this allowed Arsenal to achieve an almost perfect pass tempo.

Middlesbrough could not get to grips with the Arsenal midfield, Cazorla 128 touches (92% pass%) and Ozil 116 (93% pass%) excelled. The pinnacle of their achievements was the first goal, all 11 Arsenal players were involved, the ball being transferred both left and right to stretch the Middlesbrough defence. Possession was then stabilised at the top of the penalty area, Danny Wellbeck controlling under pressure passing to Cazorla who facing the direction of attack, was able to pick a though ball into Gibbs in the box.

This type of control does not come without defensive duty, and this is where Arsenal’s performance really impressed. All fouls against were made by the attacking players and 40% of the tackles and four regains in the attacking third, if we compare these numbers to Middlesbrough 26/37 tackles by defenders (70%) shows the constant pressure they were under. This Arsenal press also allowed the back four to read the game, anticipate and intercept to create overload situations. Middlesbrough forwards were chasing shadows and could not achieve a regain in Arsenal’s half.

The one area of concern for Arsenal would be the shot conversion rate of 8%. The shot ratio of 80% was impressive but the second ball win after the shot meant could improve the goals scored column! Giroud’s strike rate this season has been a world class 4.78 shots per goal, his two strikes (3 shots per goal) Wenger will hope his form continues. 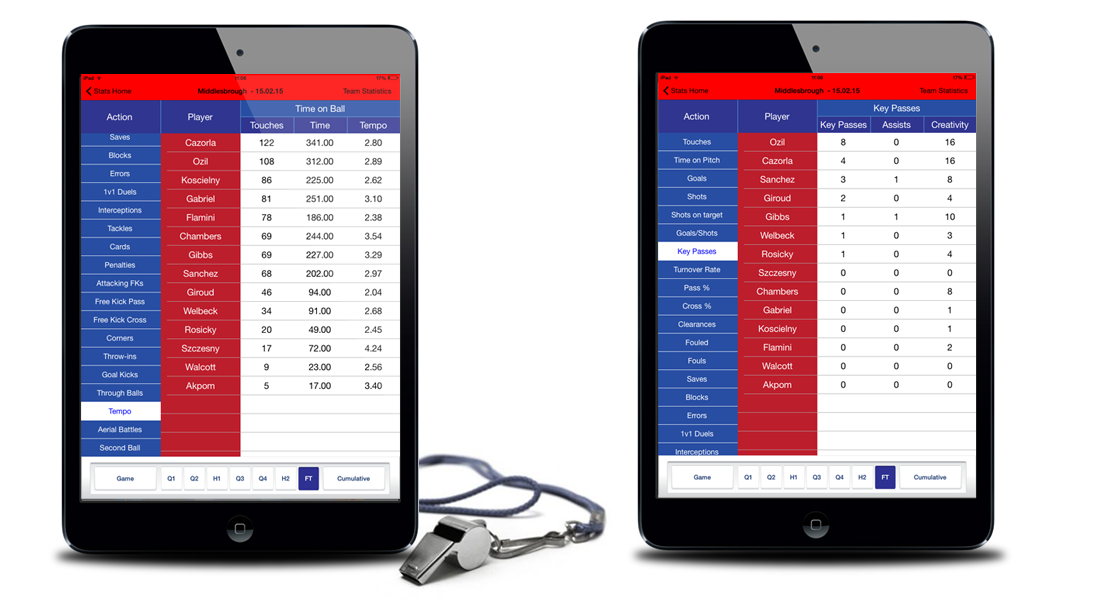