Despite the enforced absences of the suspended Jonny Evans, Angel Di Maria, and the injured Robin van Persie a familiar question remained before Sunday’s game at Old Trafford, how would Van Gaal line up his team? The answer was a 4-1-4-1 formation where Daley Blind started at left-back and Juan Mata featured on the right side of midfield; each of these both out of their regular positions.

Van Gaal could have been under pressure with his tinkering of the formation in the opening minutes as Phil Jones overhit a heavy backpass which required De Gea to scramble the ball out for a corner to prevent an own goal. Alarm bells rang even louder when the resulting corner had to be scrambled away by Fellaini, the United faithful were probably thinking Spurs were on for another three points at Old Trafford.

After the early scare United took control of possession and their pressure was rewarded in the 9th minute as Carrick fed Fellaini in behind the Spurs defence, he still had plenty to do from 12 yards but his effort shot across Lloris’s goal nestling into the corner of the net.

It was to get worse for Spurs ten minutes later as Fellaini’s header was cleared, but only as far as Carrick, who headed superbly through a crowd of players to Lloris’s left hand side.

The substitution of Townsend in the 31st minute meant that Chadli moved to the right of midfield, whilst Eriksen moved to the left to accommodate Dembele. If Spurs thought Dembele’s introduction would inspire a comeback then Rooney killed off any chance in the 34th minute. A wayward pass from Bentaleb found Rooney 45 yards from goal and he managed to brush off Dier to cooly slot home from inside the penalty area to make it 3-0.

After the break, Spurs forged a chance. The move started on the right with Dembele who fed in playmaker Eriksen switching the ball to Danny Rose on the left. Rose crossed, but Dembele skied his shot.

Harry Kane worked hard under the watchful eye of Hodgson but had little success with the lack of delivery, he did come close late in the game. Spurs forced a save from De Gea, when substitute Lamela ran past two challengers and passed to Kane, whose low shot was saved by De Gea between his legs.

Van Gaal found a style and formation which was able to cut through the all too predictable Spurs team with Carrick sitting in the holding position protecting the defenders while Herrera, Mata, Fellaini and Young sat across midfield behind Rooney. Fellaini often got forward to support Rooney, and was an imposing figure. United played at a quick tempo, with sharp passing and a calmness that reminded us of the United of old. Has Van Gaal finally got his formation correct?

We have looked at a different way of using our iPhone app this week, Using the 5 minutes prior to each goal being scored. Manchester united were very aggressive in winning the ball back from Tottenham.  In each of the proceeding period before the goal Manchester United were able to create more turnovers, win all the 2nd ball battles especially in their Attacking Third.

United used the increasing presence of Fallaini to secure possession and attack Tottenham’s left side to which Pochettino’s team had few answers and were caught out tactically.

In the first period before United scored their goals the midfield possession areas were  dominated 56/44% and 65/35%. Even more interestingly in the build up to United’s final goal they were able to achieve an impressive 78/22% possession in Tottenham’s defensive third and create two midfield errors from which they were able to play through-balls behind Tottenham’s defence to create good scoring opportunities within the penalty area.

When we investigate United’s shot selection, all of the goals were scored from the middle left sector of the penalty area with shots across Lloris and into the right corner suggesting Van Gaul had done his homework.

First half stats before the second goal 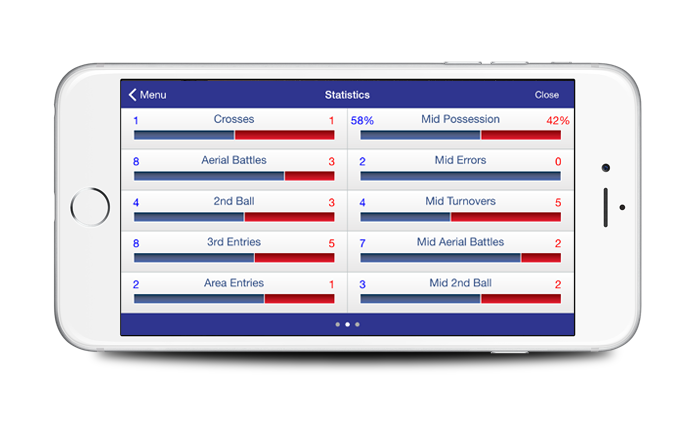 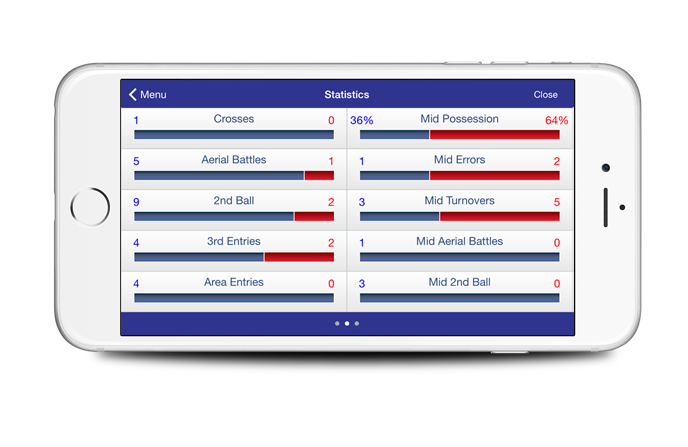