As weekends go for Southampton’s Champions League aspirations, it does not get much worse than this. Just hours after Arsenal put five past Aston Villa and Manchester United beating Leicester on Saturday, Southampton stalled and badly.

This was not the Southampton side we had seen so far this season. Credit must go to Swansea though as Garry Monk’s men defied a host of injuries and absentees to return home with all three points. It was tough on Ronald Koeman’s Saints, who missed out on the chance to move back up to third as Southampton dominated possession (63%) but the Swans were well organised defended brilliantly.

The ramifications of this defeat could go beyond three dropped points as Ryan Bertrand, a key part of their defence this season, faces a three-game suspension after being sent off in the closing stages.

Southampton piled on the pressure in the opening stages and we only had to wait until the seventh minute before Lukasz Fabianski was tested and saved with his boot as James Ward-Prowse went for goal whilst at the other end Bafetimbi Gomis put his fierce shot just wide.

Dusan Tadic then wasted a good effort as he shot wide on 31 minutes, but the Swans were stubborn in defence where new-signing Kyle Naughton was handed his debut.

In the second-half, the Swans got more of a grip on things and just before the hour Shelvey saw his low drive bounce back off the Southampton post. Fabianski then saved Ward-Prowse’s header but Shelvey was not to be denied.

With the game drifting towards a draw Shelvey who had already come close strode forward and unleashed a wicked shot that nestled in the top-corner with Southampton goalkeeper Fraser Forster helpless.

Swansea were then thankful for some fantastic defending from skipper Ashley Williams. The Wales skipper cleared two efforts off the line from Saints substitute Sadio Mane on 87 minutes.

A straight red card for left back Ryan Bertrand for a lunging tackle on Modou Barrow in the 89th capped a frustrating day for the hosts at St. Mary’s.

It proved to be the Swans’ day though as they held on for a victory which moves them up to ninth in the Premier League table.

How will Southampton bounce back from this defeat?

If we solely look at the numbers; possession 62%/38%, shots 15/6 of which 9 of Southampton’s were in the box the result would have been an easy win for Southampton. However we are seeing the weakness in trying to predict results for looking at which team dominates possession.

In the first half Swansea appeared to be under pressure giving away possession easily with 22 double-turnovers, Southampton regained possession winning 86% of the second balls and averaged 20 passes after turnovers. The main problem was that there was little stabilisation of possession in the central areas only managing seven. This meant that little penetration was achieved in the penalty area only completing 33% of the 15 pass attempts.

Koeman looked to have asked his players to change in the second half as Swansea were so compact that they needed to change the orientation of the game by making longer passes, completing 55% of their attempted through balls. However again due to the lack of quality and possession in and around the box (again below 33%) Southampton were forced wide leaving the only option of speculative crossing, completing only 30% of the 40 attempts.

Garry Monk set Swansea up to be very hard to beat and looks to have seen a weakness in Fraser Forster that he exploited to win.

They set up to protect the middle but also to exploit the space left by Southampton’s attacking full backs. When possession was regained swift counterattacks were used, however these were not unsupported. Swansea were extremely good at securing possession allowing for overloads to be created to be very selective in the shots selection, they only took six shots and surprisingly for a Premier League game 67% (4) were taken centrally from outside the box. From each of these shots Swansea came close scoring, hitting the post and twice coming close. 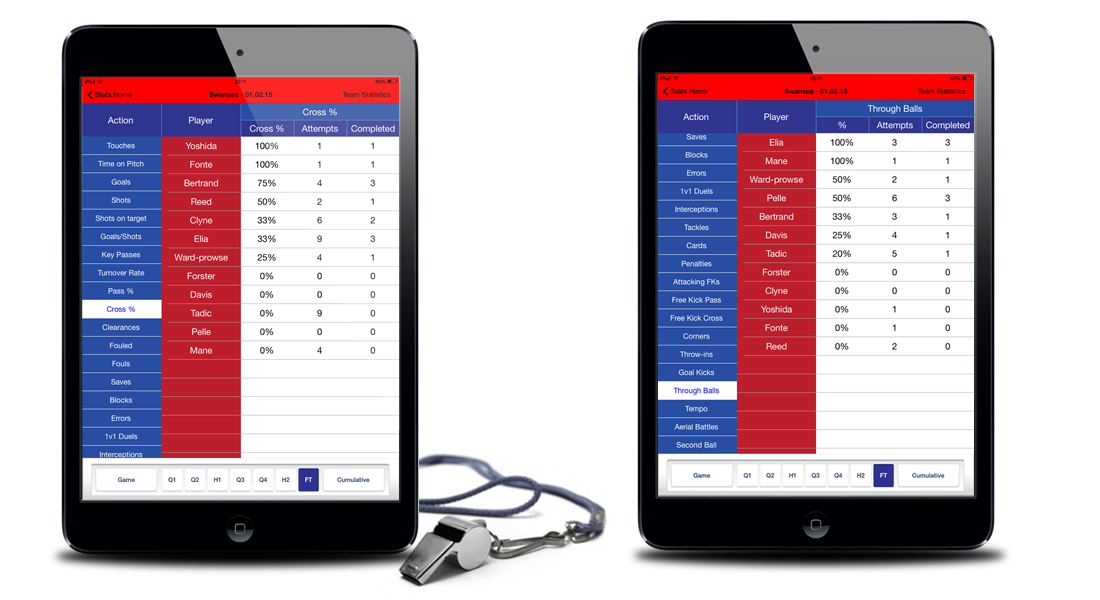